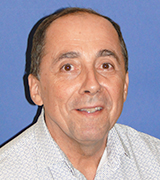 Management and remediation of contaminated sites

Dr. Millette is a Senior Hydrogeologist with 30+ years of experience.  Before obtaining his Ph.D., Dr. Millette worked for more than 7 years on soil and water conservation projects in Canada and abroad. After earning his Ph.D., he worked for two years as a Senior Hydrogeologist for SNC-Lavalin Inc. on various hydrogeology and contaminated-site management projects in Canada, Europe, and Africa. After, Dr. Millette joined the National Research Council Canada in Montreal where he worked as a Researcher for two years.

In 2000, Dr. Millette founded Hydrogéo Plus Inc., a firm offering specialized consulting, training, and R&D services in environmental hydrogeology and contaminated site remediation in Canada, South America, Europe and the Middle East. In May 2003, Hydrogéo Plus Inc. was acquired by Golder, and Dr. Millette acted, until January 2018, as a Principal and Senior Hydrogeologist where he directed various contaminated-site management projects and hydrogeology studies at national and international levels. He has also directed various medium- to large-scale emergency response projects, including that of the Lac-Mégantic, Quebec train derailment disaster.

Dr. Millette has also defended numerous contaminated site management projects with regulatory agencies and the public and acted as an Expert Witness. Dr. Millette also has experience in civil and criminal court in both Canada and Brazil, and has participated in consultative committees for the elaboration of national regulations, standards and norms in Brazil (e.g., CONAMA and ABNT).

Since February 2018, and in parallel with his teaching and research activities at Polytechnique, Dr Millette is a part-time Senior Consultant and Hydrogeologist at Golder, working on some projects, as a specialist in the management and remediation of contaminated sites and in contaminant hydrogeology, including litigation cases.

Dr. Millette is also Adjunct Professor at the École Polytechnique of Montréal since 1996.

2019-Present: Responsible of the course "Contaminant Hydrogeology" (GML8114) including laboratories and exercises.

2019-Present: Teaching of the graduate course « Treatment of contaminates soils » (CIV 6216A).

2008 – present : Teaching of the portion of the graduate course « Treatment of effluents » (CIV 8240) on the treatment of contaminated soils (3 to 9 heures par year).

2017 – 2017 : Teaching of the portion of the course "Environmental Impacts and Sustainable Development" (CIV 3220) on emergency response (9 hours per year).

1995 - Present: Also, numerous short-term courses on the management of contaminated sites, contaminant hydrogeology, numerical modeling of contaminant transport given to Industry and governmental agencies both locally and abroad, particularly in Brasil.