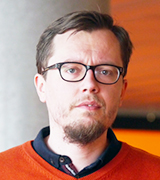 Bram Adams is an assistant professor at the École Polytechnique de Montréal, where he heads the MCIS lab on Maintenance, Construction and Intelligence of Software. He obtained his PhD at Ghent University (Belgium), and was a postdoctoral fellow at Queen's University (Canada) from October 2008 to December 2011. His research interests include software release engineering in general, and software integration, software build systems, software modularity and software maintenance in particular. His work has been published at premier venues like ICSE, FSE, ASE, ESEM, MSR and ICSM, as well as in major journals like EMSE, JSS and SCP. Bram has co-organized 4 international workshops, has been tool demo and workshop chair at ICSM and WCRE, and was program chair for the 3rd International Workshop on Empirical Software Engineering in Practice (IWESEP 2011) in Nara, Japan. He will be program co-chair of the ERA-track at the 2013 IEEE International Conference on Software Maintenance (ICSM), as well as of the 2013 International Working Conference on Source Code Analysis and Manipulation (SCAM), both taking place in Eindhoven, The Netherlands.